Summary: Flat Design Origins reveal its strengths and weaknesses. Flat Design comes with negatives and positives. It's main challenge is "correctly" implementing Flat standards that work for your UI or brand .

In the begining there was realism...

Flat Design was orginally a reaction to skeuomorphism or use of realistic visual metaphors (see image below) in user interface (UI) designs.  Steve Jobs was known to defend realism-- likely because he advocated usability and familiarity early on at Apple (1980-1982). In the early years of computer use, a trash can needed to look like a trashcan. Shortly after Steve's death, with iOS7 product UX head Jony Ives noticed users were familiar enough with touching UI elements like icons on it's popular devices (iPad, iPhone)--without the need for excess visual "baggage".  A year or two before, Microsoft had officially blazed the trail with Flat UI's many saw in SharePoint and the Outlook.com refresh of Hotmail. Microsoft continued the trend with the Metro UI and Window's phone style guide. Google joined the minimal UI design trend with it's Material Design language, taking the inspiration for interface minimalism to new heights. 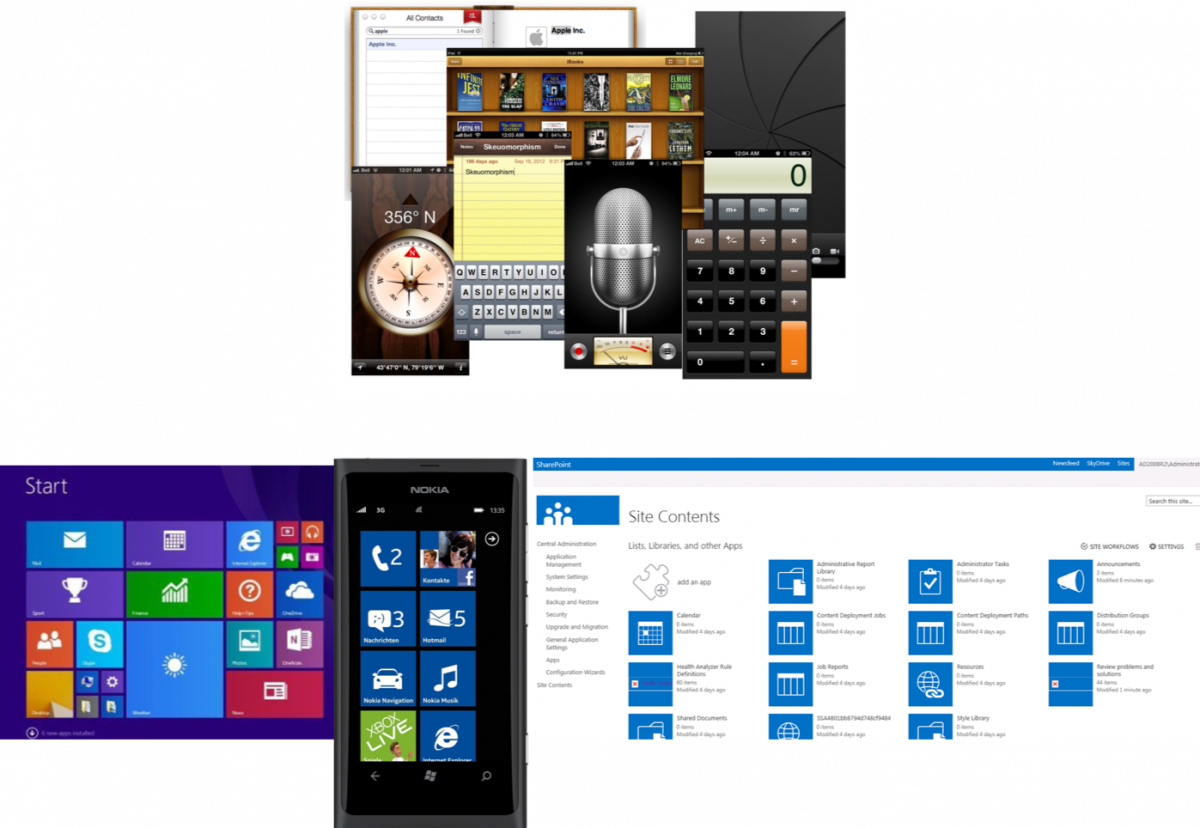 Flat Design's purging of Skeumorphism drives much of it's downsides

Flat Design can run into pitfalls (see Flat Design pitfalls- skip these 5 most common mistakes) like poor contrast and a lack of UI "signifiers" (interpretive visual usage cues).  Flat Design was based on the philosophy of stamping out or flattening visual excess (minimalism over skeuomorphism). This is a positive intention. Quickly however graphic designers "cleaned up" interfaces so much that users missed critical UI controls. Flat "2.0" was an update to the approach that tried to bring back usability, intuitive interface elements and stronger or clearer cues-- while still retaining minimalism.

The Challenge is to keep it Flat but Usable

To be clear, minimalism is not a bad thing, and what's more it has become industry standard. Many teams feel that visually heavy UI's look dated. Usability is also achievable and was a core standard in Google's Material Design standards which also have an updated Accessibile Material Design you should follow. Hint: They reinforce the good usability practices built into the main standards.  Microsoft has also come full circle with its Fluent Design system, which seeks to add more best practice to the new generation of Microsoft products, though it's impact has not be as widely felt in the design community as Google's Material Design language.

At Experience Dynamics, with teams we are helping, we're finding that the key challenge is how to use these well formed (but often ambiguous standards) in the context of your UI or brand. It's one thing to create a personal website or ecommerce site with a Flat 2.0 style and another to create Enterprise software that's robust, yet minimal.